Wars, refugees and the twilight of the spirit

Something you can do

For some of us over here in the safe and comfortable enclaves, it is hard to look over there, hard to see, hard to comprehend, and when we do steal an appalled glance, the problem seems so huge, so intractable, so impossible, that we cringe away and wring our hands and say, but what can we do? It is so much bigger than ourselves.
But there are things you can do. There are always things you can do. 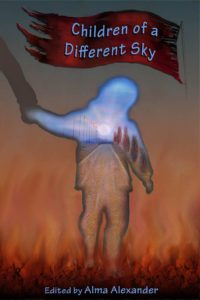 One such thing is the anthology “Children of a Different Sky”, a collection of twelve stories and two poems from a group of authors who range from multiple award winners to writers who are seeing their first published work on these pages. The profits from the sales of this book will go directly to two charities working with refugees and migrants, both internationally (the International Medical Corps) and within the United States (Center for New Americans).
The problem is too big for any one of us to tackle alone – but those of us who can tell stories can tell in fiction stories which illuminate that lost and bewildered and abandoned state of mind and how to overcome it.
The readers who pick up this book and read those stories are both picking up a treasure-house of tales which will deeply touch them, and supporting a cause which will directly help those who are living many such stories right now.
The problem is big. We, the storytellers, are trying to do our part. Our readers will also be doing something tangible. Their purchase of a copy of the non-profit anthology “Children of a Different Sky” will mean they will be directly sending aid to charities who work with refuges who need help so desperately.. You can make the world a better place… by buying a book.

~~~
“Children of a Different Sky” can be preordered, ebook or paperback, HERE