The epistolary novel in the digital age

The story-in-correspondence found in epistolary novels is by no means a new thing. It’s been going on for centuries.
Letter writing to people who mattered but who were not close enough to speak to every day was once an art form, both in content and in execution. Some people sat at a kitchen table writing letters with a pencil. Others sat at a writing desk with inlaid leather surfaces touched with gilt, dipping quill pens into silver inkpots, writing in elegant cursive about the important things that mattered to the heart and the soul, as well as about what one had for dinner and whom one invited to share it.
Then came email….
But I digress. Stick a pin in that for the moment.
Stories told in the form an exchange of letters had a strange quality of intimacy, as though the reader had somehow gained access into the innermost citadel of the keep of someone’s life, suddenly privy to their hidden thoughts and feelings, because you HAVE to have access to those, if you’re writing a letter, if you’re writing from the heart. Letters were a glimpse inside a soul.
That is why those books caught on – because the letters are an invitation to become a part of the letter-writer’s world, and then share the sensation of being stamped and mailed, sometimes sent across the globe, the glory of that journey being a part of the glory of the communication. The waiting for a reply was part of it, too. It was a slower, more delicate time, a golden gleam, a communication in nuance where people took the time.
Then came email.,..
But stick a pin in that again.
I still remember special onion-skin notepads which one used to write “airmail” letters, because the thin paper meant cheaper postage. I recognized the red-and-blue-edged “airmail” envelopes – and those were special, they meant letters from far away. Probably not one kid today would know what one of those envelopes on your hallway table meant, the excitement of an OVERSEAS letter from someone so very far away.
But letter writing withered when the concept of distance disappeared with the Internet.
These days you write an email from one coast of America and it is instantly received on the other — or in Europe, or Japan, or anywhere someone is with a laptop and a hotstpot connection to the Internet. Time and space disappear in the blink of an eye. Instead of waiting weeks or months for a reply, in gleeful anticipation or grim foreboding both made bigger and more intense by WAITING, you get impatient when you don’t get a response IMMEDIATELY. What could anyone else possibly be doing that they cannot answer your email the moment it pops into their inbox? I mean, how RUDE.
And yet there is a nuance that can linger in emails too. I treasure a four-word email from my then hospitalized husband:”Need socks. Love you.” 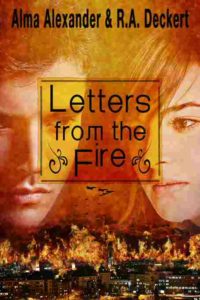 Epistolary novels have always existed – but these days the communication can be electronic, too. I co-wrote an epistolary novel with the man I later married, with the two of us “writing” to each other, in email, in character, to create a story of two people who moved from enmity to friendship to love at digital speed when the Internet connected them as their nations went to war.
That’s how ‘Letters from the Fire‘, was born, an epistolary novel in which a lifetime of living is encapsulated in an exchange of emails which covers a period of time measured in days, not years.
In the era of email, we’re still writing letters, still reaching for each other’s souls. These days, it’s just faster, that’s all.
If you think that it’s also shallower, more perfunctory, more ‘surface glitz’ than anything that went before – well – there is something to be said for the handwritten letter inscribed by a fountain pen in an elegant hand. But story and emotion can transcend that.
Write a letter.
Read a book of letters that others wrote.
It is part of what it means to be human.
My epistolary novel, ‘Letters from the Fire’, can be bought HERE 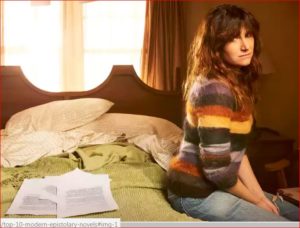 The Guardian takes a look at 10 other modern epistolary novels. See them all HERE