The world I built 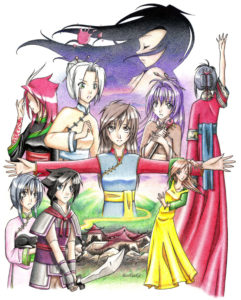 When I wrote the novel, “The Secrets of Jin-shei”, it was not my own historical background that I referenced, but that particular time frame and setting, a land inspired by Imperial China which I called Syai and it became the foundation of an entire alternate world.
I wrote it as historical fantasy – as a sweep of history which takes place in an imaginary country – and I succeeded so well that I have been rapped on the knuckles for being “wrong” about some historical detail despite there being no historical detail to be wrong about. What this said to me is that I got the SENSE of history right, a sense of this being “real” in some aspect of it, that people feel that it has been rendered with enough verisimilitude for them to be able to believe that it (or something very like it) must have REALLY happened.
I fast-forwarded my story 400 years and wrote “Embers of Heaven”, which is set in the same land as “The Secrets of Jin-shei” but after four centuries have wrought their changes on the people and the social fabric of that country. A lot can change in four hundred years, and much – too much! – did change, here; This second book was still inspired by China but this was the China of the Cultural Revolution, much harsher, much more visceral than the first novel set in Syai – and yet, and yet, “Embers” has some of the most lyrical passages I have ever written, some of the most tender scenes of love and caring and passion that I have ever conceived. Set against the harshness of the milieu, these scenes shine.
But more than that – I extended the geography of this world. There are other countries in this world I am creating, just as there are countries which are not China in this our own familiar world. I introduced Ellas, which to anyone reading the scenes set in it can simply be nothing other than what maps in OUR world is Greece.
And having established the fact that my imagined world is is a complete world, I then wrote a third book set there. “Empress” is a historical fantasy just as lush and lyrical as the previous two, but this time set in the glory days of the empire of Byzantium, a story based on the immortal tale of the relationship between Emperor Justinian and the Hippodrome-bred actress and courtesan who became the Empress Theodora. If you pay attention you will notice a tiny detail in “Empress” – there is a caravan which is preparing to set off for exotic lands far away to pursue trade in silks and spices… a land called… Syai.

I am drawing a map here.