The Death of Beth

Over the mumble years since I first read “Little Women” as a girl, I have taken more than one quiz about which character I wanted to be, or was most like.
Of course, I always came out as Jo.
Because…well seriously, Jo is the only “real” one out there.
These reflections come in response to an essay by Stephanie Foote, The Thing About Beth (“Little Beth, loved by everyone: Except me“), in the LA Review of Books.

Amy was Vanity, Meg was Poisonously Good (with just that faint little dash of spirit in the end, but that got scotched pretty fast and she remained the Good Girl who Did What She Ought To). And Beth is a gentle ghost.
And not one that haunts, either. She wafts through the story, and then she’s gone. Perhaps it’s that she didn’t have TIME to do anything. She was just Sister #4 from central casting, the one destined for the weepy let’s-go-the-violins death scene which would serve to “strengthen” (in the virtuous “what doesn’t kill me makes me stronger ” sense) everyone else.
This was a book I read when i was quite young, living in a very different world, and to me, the background and the setting of it was as incomprehensible as it would have been if it had been set on Mars. But I devoured it, and I fell in love with Jo, like everyone did. I felt betrayed when Laurie went and picked up silly flappy little Amy instead.
Yes, I cried when Beth died, but it really was a sad set-scene. I don’t think I wept because I had felt any kind of warmth or a kinship with poor little Beth. I wept because I was supposed to weep at that point, for that character. And everyone dutifully did.
I suspect that I would less susceptible to that if I read the book now. And yes, i suspect I would respond far more viscerally to the things that Beth left behind. So much of that character lives in “her things”: Too much. Not nearly enough of it lived in the girl herself…
Read the whole essay about Beth at the LARB website HERE
~~~~~ 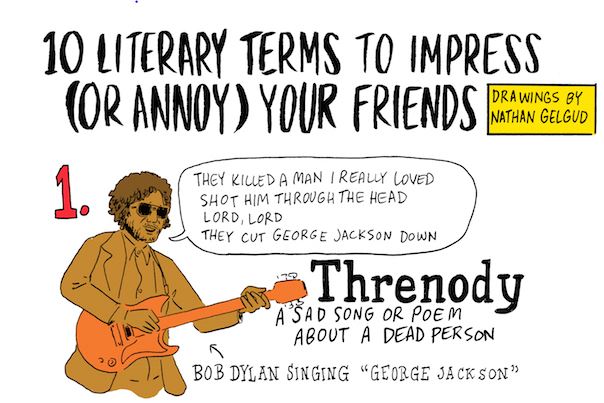 At Signature, Nathan Gelgud offers us

You might not know it, Gelgud writes, but you have probably put a prolepsis into play recently.
“Did you know that a signature isn’t necessarily a scribbled name on a credit card receipt? You know that classic character that Gilda Radner played on “Saturday Night Live” who’d confuse “violence” with “violins”? Do you know what kind of mistake that is? You probably know what a climax is, and maybe even how to pronounce denouement, but do you know what part of a plot makes up the anagnorisis?”
A delightful essay you can read at the Signature website HERE
~~~~~
In the New York Times, Annie Correal writes about

For about four decades, applicants wanting to work at the Strand, the undisputed king of New York City’s independent bookstores, have confronted a final hurdle, the literary matching quiz.
There are tests for driver’s licenses and citizenship, for New York City landmarks preservationists and sanitation workers. But a quiz for an entry-level retail job at a bookstore?

Fred Bass, 88,created the literary quiz in the 1970s. Credit George Etheredge
Bass, who owns the Strand along with his daughter, created the literary quiz in the 1970s. He had selected masterworks to appear on the quiz,
“And then I did a sneaky thing. I made one not match. ‘Gone With the Wind,’ and no Mitchell,” he said
BTW, I took the quiz and got 40 out of 50 right. My husband refuses to tell me how well he did. [I always beat him at Scrabble, too. 🙂 ]
Read all about the Strand and take The Quiz at the NYT website HERE
~~~~~ 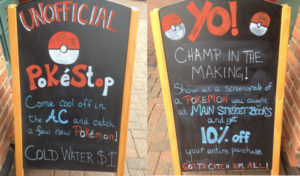 Photo courtesy Facebook/Main Street Books
The display sign outside Main Street Books in St. Charles, Mo.
Booksellers are always looking for new ways to attract more customers to their stores, but it’s doubtful that many thought that Pokémon would be the answer. The sudden popularity of the smartphone video game Pokémon Go is driving people into bookstores and, in some cases, driving up sales.
The nature of the game is proving a boon for foot traffic at some bookstores, like Wild Detectives Bookstore in Dallas. “It’s crazy,” said Sam Villavert, a barista at the store.
Read the whole story at Publisher Weekly’s website HERE 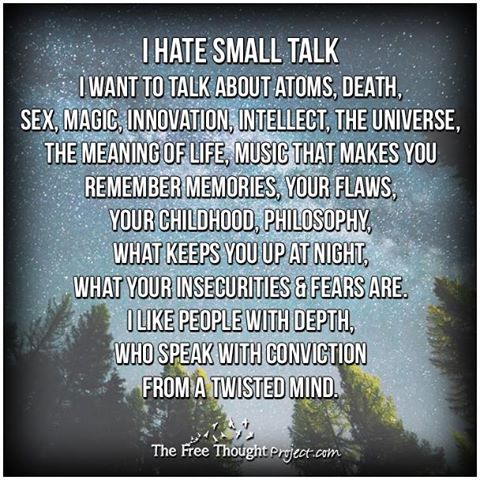 A truly twisted mind never thinks along a straight path. I like to travel that way. On the back roads. Seeing things that other people miss because they’re trying to get THERE from HERE way too fast…