Are you a god?

If you are a writer, yes.

In a very real sense what you do when you create a fictional world is neither more nor less than being a god of a universe of your own creation.
We writers, we artists, we take the building blocks of the familiar and go on to make something different from them, something rich and strange. There is a train station where all the trains to these places stop, and we all stand there on the platform selling tickets, tickets to OUR worlds, and we smile when someone picks one up and boards a particular train and sits there leaning forward with shining eyes full of anticipation.
The worlds we create can be filled with intricate and painstaking detail – or they can be just hinted at, with the larger picture there for you, the reader, to fill in when you lift your eyes from the words on the page and the ideas blossom in the back of your mind.
Some of the best world-creating moments are almost incidental – like in a fairly silly episode of Doctor Who named “Gridlock” where the premise rests on this ludicrous idea of a traffic jam that has literally lasted for lifetimes… and yet this silliness is lifted into the transcendent.
Right at the end of the episode, the Doctor speaks with passion and pain and longing and regret and nostalgia and the purest love, of his lost home, Gallifrey. The world is built, sketched in a a few powerful words, a couple of incandescent sentences.
I’ve never been to Gallifrey. I can’t have ever been there. It does not exist any longer – the Doctor said it’s been destroyed. But, of course, it never REALLY existed at all, outside the story, outside the Doctor’s own mind and heart and memory. 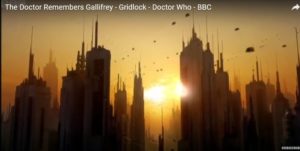 And yet some part of me thrills to the “burnt orange sky”, and the “mountains that shine when the second sun rises.”

(With a little search you can find a video clip of this brief scene online and it’s worth the effort.)
I do this thing, worldbuilding. I take pride in creating worlds that live and breathe.
And sometimes I get rewarded.
“I could almost smell the cold and the freshness of the air and the tremble of the earth,” someone told me the other day, in reference my novel ‘The Secrets of Jin-shei‘.
I took a reader into a world that rose, real, around her as she rolled into the heart of it. One journey into a sense of wonder, validated. There are moments of which entire days are made. This gave me one of those moments.
Professor Tolkien wrote about all this, powerfully:
Although now long estranged,
Man is not wholly lost nor wholly changed.
Dis-graced he may be, yet is not de-throned,
and keeps the rags of lordship once he owned:
Man, Sub-creator, the refracted Light
through whom is splintered from a single White
to many hues, and endlessly combined
in living shapes that move from mind to mind.
Though all the crannies of the world we filled
with Elves and Goblins, though we dared to build
Gods and their houses out of dark and light,
and sowed the seed of dragons- ’twas our right
(used or misused). That right has not decayed:
we make still by the law in which we’re made.
Fantasy remains a human right: we make in our measure and in our derivative mode, because we are made: and not only made, but made in the image and likeness of a Maker. — J.R.R. Tolkien, Tolkien on Fairy-stories
In a LiveJournal essay a few years ago I challenged my readers to:
“Take me to a place you’ve never been and make me homesick for it. Make me yearn for it and believe in it and love it and miss it as though it once belonged to me and I still carry it in my heart.”
It’s easy – well, easier, anyway – to write about a place one has personally known and loved. I have done it talking about the Danube and the way I feel about that river; I’ve done it about the places of my childhood.
But can you be homesick for a place you have never been, can never go? Is it possible for an Earthbound human to be homesick for a planet called Gallifrey, or a wood known as Lothlorien? Is it possible to be homesick for some patch of this our own world which one has never seen or visited?
For instance…
Oh, the moment in which the sun is not yet quite risen, not yet quite ready to pour itself around the shadowed crags in their veils of mist, but the day has started – and the light is pearly and nacred, shifting and shining, and the mists flow and coil around their great standing rocks and islands as though they are saying farewell to a lover. And the sky is lost in a brightening glow and the silhouettes of stones sharpen into individual sharp edges, and trees, and in between all there is the river, and the water is starting to change from darkness to a dull pewter glow which echoes the pre-dawn light to the glitter of sun on water as the first fingers of sunlight touch the ancient river and wake it into day once more, another day.
Already there are boats moving, and men silhouetted against the sky, and the faint shimmery lines of nets being cast into the water where the fish are waking, too, and waiting to offer themselves in the daily act of love and sacrifice that feeds the people of these crags, of this river. And the shadows are black, and the crags are charcoal gray and deep deep green in the faint light, and the water is turning golden and the sky is turning a faint blue, like the delicate shell of a bird’s egg, and soon the sun will come and the water will blaze with glory.
I am talking about a real place, the Li river, Guilin, China. But I’ve never been there. I’ve never seen this, outside of pictures. 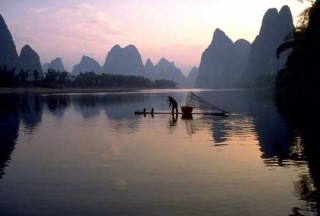 I found this photo AFTER I wrote that paragraph above. I went looking for images that matched the view from my mind’s eye. I wasn’t describing the pictures; the pictures were found later to match and illustrate what I had already described…
And yet it’s there in my mind’s eye. And I can make myself homesick for it by letting the image live in my mind.
Perhaps it is possible to take a soul to Gallifrey. And make that soul love a place never seen, impossible to reach, a place that may never have existed outside the mind and heart of a character in a story…

My first book audiobook – Paper and ebook and voice, oh my.

I am a very visual writer. I sometimes basically close my eyes and just transcribe the movie that’s unfolding before me on the backs of my eyelids. I SEE things.
Some writers dictate their books into a recorder before transcribing them onto the page, and some use software such as Dragon to dictate their books directly onto the screen. But that is not the way I think, not the way I write. I need to see the words dance on the page. Not hear them.
For the same reason, I haven’t really taken to audio books the way others, my husband for example, have. I don’t take in stories JUST by listening to them.
But the times they are a-changing, audiobooks are becoming more popular and I have now taken a step into the future with my first book in audio format, ‘Embers of Heaven‘.
.

I listened to the sample on the Amazon page for the audio book and it’s eerie to hear my own words spoken at me. It’s well done, at least in the sample I heard. (I have to admit that I would probably have chosen a female narrator voice since my main protagonist is a woman and the final section of the book is pretty much a first-person journal-like narrative from her POV.)
My first audiobook. Huh. I feel all grown up now.
You can sample or buy it at Amazon HERE 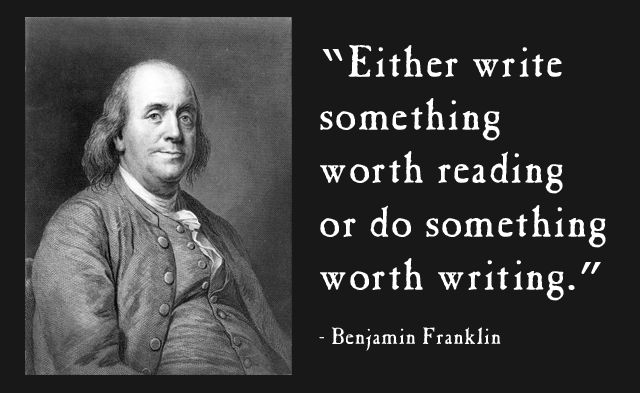 In his own way, he was talking about building a world.

About me    My books    Email me    Get My Newsletter
If you found this blog post interesting, amusing or helpful, then please use the icons below to share it with other writers, readers or the guy next to you on the subway.
Save
Save
Save
Save
Save