A loss too near

In a few days, it will be two years since I lost my father.
Second anniversaries are… odd.
It’s still close – it’s still too close. You think back and the memories of the death, the dying, they are still here, close to the surface; if you pick at the scab, it still bleeds. This is not a scar yet. And yet it feels self indulgent to dwell on it.
It isn’t that first year, that searing first anniversary, where you you still have permission for the white-hot grief.
I remember vividly that last year on the day of his passing I took a bunch of flowers to Hospice House, where he died, to leave them in his memory – and I was keeping it all under control, I was going to be just fine, I was going to explain everything clearly and calmly when i walked in through that front door and spoke to whoever was there on duty at the front desk.
Except that’s not what happened. Not at all. i walked in there through that door which was the last door he had ever passed out of, and a woman behind the front desk looked up and smiled. I began, “my father…” and burst into tears. Into great hacking heaving sobs that I couldn’t hold in. We hammered out between us who I was and why i was there, and I was saying I just wanted to come and say thank you one more tiem for what they did for him, and they said the flowers were lovely, and I cried, and so did the woman at the front desk, and then I climbed back into my car with tears still blurring my vision. That was raw grief, my grief, and his spirit was not there. He was long gone. However, I had permission for that grief. The Jewish tradition has a name for this – Jahrzeit – the one-year anniversary. And it was okay.
In the aftermath… I spoke of him less. I would remember individual incidents or sayings, not a general aching recollection, a sense of shadow, a feeling of missing something that should have been there. The speed dial on my phone still says “Mum and Dad” but I have stopped expecting my father to be there, I have stopped catching myself halfway to “oh, I should tell him this he would love it” if I find something he would have enjoyed on the Internet. The second year is a year of distancing, and I have distanced. Hospice House is now not longer the first image in my head when I think of him. 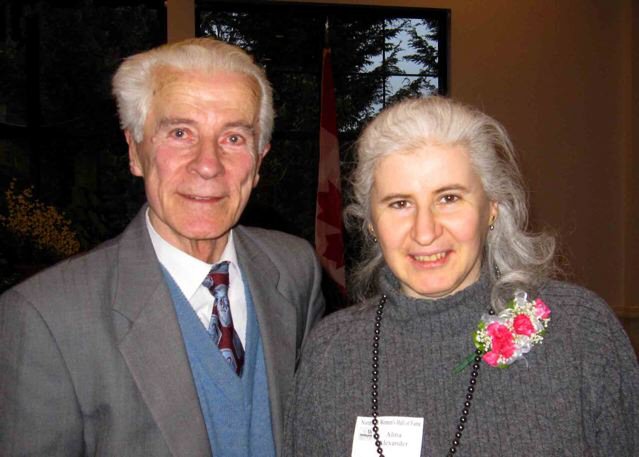 I remember him on other ways,
I remember him as the man who could not tell a joke (either because he couldn’t get the beginning straight in his head and had to start the damn thing three times before he could be sure of the story, by which stage him telling  the joke was usually far funnier than the joke itself ever was, or because he would flub or, worse, forget the punchline at the critical moment.).
I remember him as an incarnation of that cartoon character of the bewildered man holding up a hammer, with all the fingers on his other hand bandaged up, a hole in the wall behind him, and the shattered remains of one of those stupid flying ceramic ducks on the floor at his feet. You did not point my father at handyman jobs. The best he could do was hang a picture, and even THAT took planning and procedure and twice as long as anyone else would have taken to do it.
I remember him when he found out about a particular novel of mine, which I had successfully kept under wraps right until I could announce that yes, it was being published, and his response when he was told about it was literally this:
“You wrote a book and are getting it published without ever having told me about it? I will never forgive you. Now give me the manuscript.”
And he took the MS printout and sat down with it on the living room sofa, and did not let go of it until he had turned the last page. And then he cried. And on the heels of that I remember that “Random”, the first book in my new series, bears a dedication to him… because this was the first book of mine that he did not live to see, to gather up and to collect lovingly on his shelf which was groaning with copies of my books in every language in which they had ever appeared, to read carefully, to store up another helping of approval and pride.
I don’t idealize him, nor idolize him. There are other memories and some are not wholly pleasant. But they’re all memories now.
This world has been empty of him for two years. His ashes are dispersed in the great quiet Pacific Ocean. His soul no longer clings to the dust of this dirtball of a planet. The things he loved are gone or are loved by someone else. There’s a sense of inevitability and of progression – the sense of loss is no less but it is also no longer sharp, no longer acute. And it feels self indulgent, these days, to remember him and cry. People lose parents every day. It’s the way of the world. It feels as though I should gird up my loins and wipe my nose and keep going, now.
That part of my life is over, the part when I was this man’s daughter-in-the-flesh. I am now daughter-in-spirit, daughter-in-memory, I am the daughter that was, half a daughter, with only one living parent left to anchor me to that identity now. There will come a day on which I will have to say that I USED to be a daughter, and on that day I become an ex-daughter, an orphan, but I suppose I am lucky in that have kept my beloved parents for longer than it is given to some. I suppose when the inevitable day comes that my ancestral walls are all down and the cold winds can blow freely through the ruins of that childhood house which will exist no longer I will have the right and the permission to re-indulge one last time in that rawest, sharpest grief.
But for now… it’s the second anniversary. It feels too close, and too far away. I feel as though I am just far enough from shore not to know whether it’s worth paddling back towards land, or resolutely setting sail towards the unknown horizon. Perhaps, next year, the shore will have gone a little more distant still and the choice won’t be so hard to make. But now… right now… I still feel the tethers, invisible links to all that is left behind on that land I have left in my wake, and it feels… weird… almost dangerous… whatever I do.
So right now, on this second anniversary, I will do nothing at all. I will let myself float on the waters, and lie back in my cockleshell boat, and stare at the sky full of stars – and maybe I will see a star shoot across the sky, and know that on the second anniversary it might be okay if I let myself believe that my lost father is somehow remembering me.
~~~~~
Alma Alexander     My books     Email me