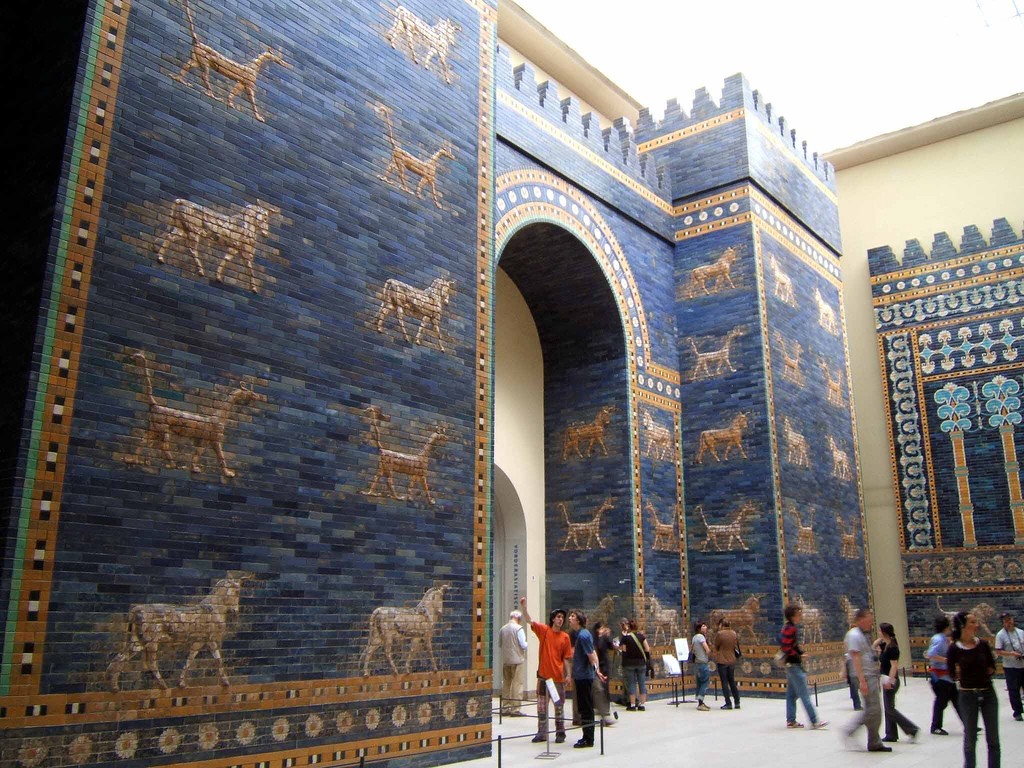 “Ishtar Gate at Berlin Museum” by Rictor Norton
2.000 Years Ago in Babylon
In the year Berlin turned 750 years old, I boarded a train in Hamburg bound for West Berlin. It was still very much a divided city, then, with the Berlin Wall an impregnable and deadly barrier. I still remember, vividly, seeing the crosses set up on the fences next to the Wall, in memory of those who tried and failed to escape.
The train started its journey in what was then West Germany, and once it crossed the border into East Germany, it was not allowed to stop until it reached its destination and dumped out its passengers in the enclave that was West Berlin. It was surreal, hurtling through this land that we could only look at through grimy train windows – while the light lasted, and then, when night fell, not at all. We might as well have been on a starship, a long time ago in a galaxy far, far away.
West Berlin was an isolated oasis of western mores and customs, like some odd piece of shattered piece of mirror-glass that glittered like a shard of a jewel set into a grim, grey, utilitarian machine – we are the Borg, you will be assimilated, resistance is futile.
The main drag of West Berlin, the Kurfurstendamm, was a cross between Broadway and Soho and the Champs d’Elysees, brightly lit, full of ads (which included larger-than-life pictures of showgirls wearing feathers and sequins and very little else). It was full of shiny and sleek modern cars – Mercedes, Audi, Volvo, the pricier and very much the upper-bracket versions of those brands. It was full of people, many young, most clearly moneyed, out for a good time. Shops were numerous, not hard to find, well-stocked. It looked and felt like any great Western city…
…and then you looked closer.
Every so often a tour bus would fall silent as the gawping tourists were shocked at the sight of a ghostly ruin, left precisely as was after the bombing of Berlin during World War 2 so that the citizens of this place might remember what had gone before. We were told that a significant percentage of modern Berlin was rebuilt using bricks hand-salvaged from the wreckage of the post-war city – but some of the ruins were left standing, deliberately, in a cold and stern reminder of what horrors the demon of war brings in its wings.
One of the most pointed statements is made by the Kaiser-Wilhelm-Gedächtniskirche, or the Kaiser Wilhelm Memorial Church, whose original tower stands beside the modern incarnation of the church like a malevolent spirit, a powerful presence, a shadow on all that Kurfurstendamm lights. Perhaps, in some ways, the young and the beautiful and the well-heeled of the present played as hard as they did – in that brittle and diamond-edged kind of defiance – because they had these old walls standing behind them, there to remind them, to always remind them. These were not ruins of the Roman empire, or something left behind from another century. These walls were cast down within living memory, and the memory still burned.
This entire city, microcosm after microcosm of it, was a museum.
I joined a tourist group for an expedition into East Berlin – we piled into a bus, on a group visa, and were painstakingly counted, and then counted again, and warned over and over and over again not to stray from the group because we were there “on a group visa” and if any one of us was caught wandering off alone we were not covered by that and the tour company could not help us. Somewhat disconcertingly, we were told to have the numbers of our respective embassies or consulates handy, just in case.
These were the days when Checkpoint Charlie was still Checkpoint Charlie and not the Disney ride with a gift shop which it later became.
Our bus was stopped, two East German police officers in grey uniforms and peaked caps and black leather gloves and cold eyes came on, our passports were handed over, and for the next several minutes while we all held our breath each individual passport was scrutinized by each of the two men who’d stare at the passport, then look up and skewer the holder of the passport with a gimlet gaze, then back at the passport, back at the person, several times, until the hapless foreigner began to be really afraid that he might have done something of which he was unaware but that these people might find objectionable – and make life incredibly unpleasant as a consequence. But in the end we all passed muster, and the bus was waved through.
East Berlin was… another world.
Beyond the wall, the streets were narrower, shabbier, more old-world. There were also ruins but in some strange sense these bore more the stamp of “we can’t do anything about this, just leave it there” than the Western idea of “lest we forget”.
The very air smelled different because the cars on this side of the walls were old Trabbies rather than new Mercedes, and probably coughed up more Bad Stuff out of their ramshackle exhausts in an hour than their West Berlin peers did in a month of Sundays. But there was beauty here – the tree-lined old streets, the sense of a slower, older, more restrained world, with the beautiful women who passed in the streets owing their beauty to their skin and their bone structure and their beautiful eyes and not to cosmetics used to enhance them… 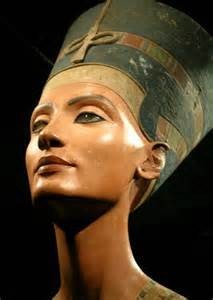 …and speaking of beautiful women, our bus was supposed to be heading to the Neues Museum, to feast our eyes upon this.
But it was not to be. Of all the days in all the years, it was on the single day that I was in East Berlin that the Neues Museum was closed – and so I would not be privileged to set eyes on Nefertiti.
We were diverted to the Pergamon Museum instead. I had no idea what to expect, but what I found… made me forget the Egyptian Queen completely. The Pergamon Museum showcased artefacts from atniquity (Greece, Rome, Babylon) but of necessity these tended to be fragments and shards, and not anything complete and whole which could be shown as fulfilling the function it was originally meant to fulfill.
A magnificent achievement
What made the Pergamon unique was that they looked into the artefact and not so much showed it as a ragged and inadequate remnant of something bigger and more glorious… but REIMAGINED it as it must have once looked, should have once looked, performing functions it must once have performed.
This entailed using the fragments that they had and “filling in” the rest of the artefact – a bass relief, a tiled gate – with contemporary materials carefully chosen to complement the original material but not in any way pretend to BE that material. So you were looking at yet another ghost – this one reconstructed – seeing the shape of the fragment which the museum had obtained and then, through and beyond that fragment, getting a glimpse of what the whole original structure must have looked like.
This might sound odd or weird or strange or even unbelievable and disrespectful – how do they dare to tamper with these ancient things in this manner? – until you actuall GET there, and you SEE it, and you realize what a magnificent achievement it all is.
The one thing that still stands out in my memory is the Ishtar Gate, a reconstruction of a tiled gate from ancient Babylon, made, in part, from tiny blue tiles which were MORE THAN TWO THOUSAND YEARS OLD.
This was enough to stop my heart for a moment. I was looking at something made by human hand two millennia ago. It was unbelievable. It was impossible to process. It was… there. Right in front of me.
When I was there, so many years ago, the gate was accessible – it was possible to reach out and actually touch this thing, this thing that was two thousand years old, with your own fingertips. You, and some ancient tilemaker, passing a small mosaic tile from one human hand into another over the span of two thousand years.
This is one of the few things that completely blew my mind in this lifetime, something that still makes my heart beat faster when I think about it even today. That I was privileged enough to have had this experience still humbles me. And there are times I still dream of the Ishtar Gate.
It’s been a long time since Berlin was just Berlin, and not East and West. It was a painful and sundering time… and yet… I am glad to have had the chance to have experienced that older, divided, city. To remember that Wall. To know what it means to be Divided. In many ways the life I have lived has served to inform my writing – and I have taken many valuable lessons from Berlin, the Berlin I walked in, the Berlin I met.
I know what it means to be afraid. I know what it means to pretend not to care. I know what it means to look over into a Promised Land, knowing that Hell lies between you and its shores. I know how the passions of an ideology can hold a society captive to its whims and then its guns.
I also learned, two years after I left the city and the Wall fell, what it means to have borders erased.
I never saw the Egyptian Queen but I don’t regret it – the things I took from the Ishtar Gate were far more enduring than just that glimpse of fabled beauty.
I crossed a threshold in a museum building in what would turn out to be a memory of a museum city, and I still remember what it was like to be human two thousand years ago in Babylon.
~~~
NOTE: This was posted more than four years ago on my LiveJournal blog as part of a month-long series on museums I have visited around the world. You can find the original of this and can see the rest of the series by scrolling back or forward from this entry.   Museum series HERE
Alma Alexander
~~~~~
Quote of the day
“There are times I still dream of the Ishtar Gate.” ~ Alma Alexander
~~~~~
My books      Email me
If you found this blog post interesting, amusing or helpful, then please use the icons below to share it with other writers, readers or the guy next to you on the subway.