At io9 Charlie Jane Anders, has picked:
18 Perfect Short Stories that pack more punch than most novels
One example of hers is: 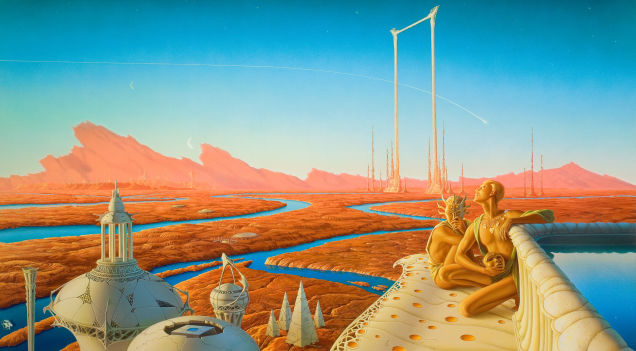 “There Will Come Soft Rains” by Ray Bradbury – This story is in a special league in the knife-twisting sweepstakes. Like a lot of stories in the years following World War II, it’s concerned with the threat of nuclear annihilation, but also with how our technology might outlive us. The whole thing is one big gut-punch.
I wholly agree with the Bradbury. And the Asimov; it is one of his best stories, ever. And of course, the Le Guin. I haven’t read some of the others, but maybe it’s just my sensibilities in that some of the more recent examples on this list – although technically brilliant and beautifully rendered – have left little permanent mark on me. They just lacked the HEART of some of that older classic stuff.
There is at least one Arthur C. Clarke story I would have added to the list. The Star offers an emotional punch to the gut that is unforgettable.
Agree with her list? Disagree? What would you add?
Read the whole story HERE
~~~~~
I read only 34 out of the 57 books on this list. I should be ashamed of myself. I am less well read than a cartoon sitcom character. I hang my head in shame.
Daria Morgendorffer’s Reading List 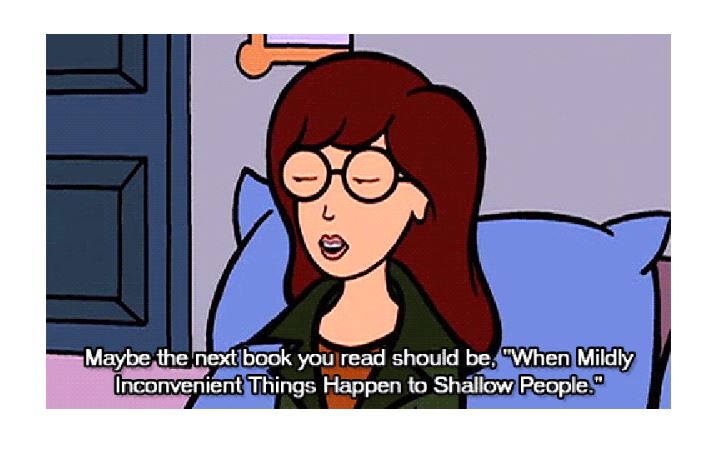 MTV’S much-loved animated sitcom Daria centered on a smart, disaffected teenager with a caustic wit. The show was filled with literary references.
Here are 57 books that Daria read or that were mentioned during the episodes. As DariaWiki puts it, “If it’s old, morbid, or esoteric, Daria will read the hell out of it.”
Read the whole story HERE
See how many YOU read HERE
~~~~~
Top 10 castles in fiction 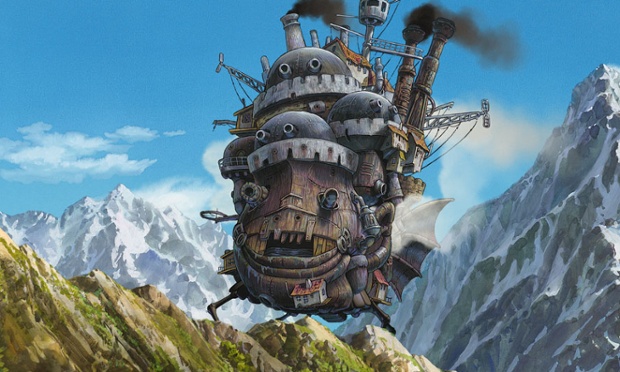 The ‘extraordinary and bracingly complicated’ Howl’s Moving Castle.
From classic scary Gothic settings to warm and dreamy refuges, fiction is full of castles. Jessamy Taylor picks the most memorable
There are many things you can do with a good castle. Hide in it. Feast in it. Break into it. Break out of it. Plot in it. Live your whole life in it. Fiction is full of castles: on hillsides, in forests, in towns, on clifftops. Castles dreaming in the distance, or castles looming over your head. Castles made of stone, of wood, of ice; with passageways tunnelling deep into the ground, or spiralling high with turrets and stairways. Castles safe and warm, or frightening and oppressive; busy and functional, or lonely and ruined. They’re everywhere.
Read the whole story HERE
~~~~~
The top 10 knights in literature 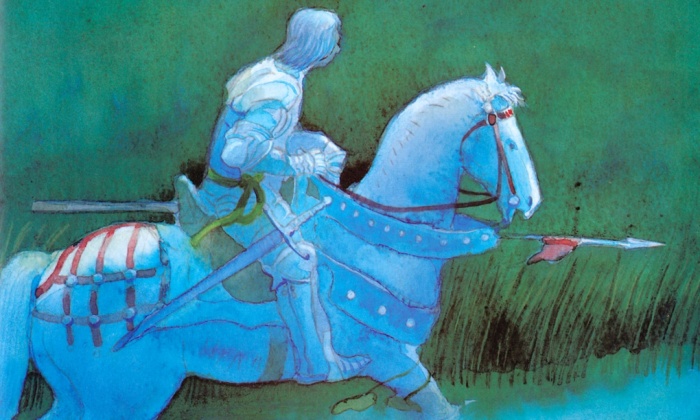 Illustration by Michael Foreman from the book Arthur, High King of Britain by Michael Morpurgo (Egmont). Photograph: Publisher
Author and historian Thomas Asbridge picks his favorite medieval adventurers.
Whether it be a gallant, armour-clad noble racing to the rescue of an imperilled damsel, or a blood-soaked warrior engaged in a savage massacre, the image of the knight in action is inimitably linked to our popular conception of the medieval world. Knights stood at the forefront of European history for centuries, serving as conquerors and keepers of the peace in a barbarous era fraught with conflict and immortalised as heroes in epic myths and romanticized tales.
Read the whole story HERE
~~~~~
Cats and books, what’s not to love?
8 Great Novels Starring Cats 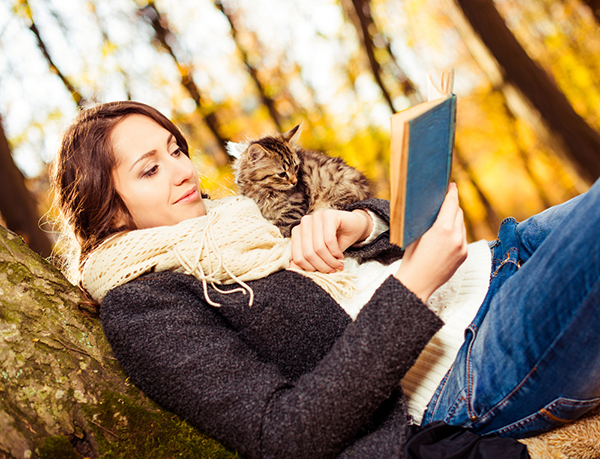 Photo: Shutterstock
“When I’m not busy working at my day job and writing for Catster,” JaneA Kelley says, “I love to read. I especially love to read about cats, and even a quick glance at my bookshelf or my Kindle library proves that. The stories below are ones I found entertaining, engaging, and fun to read (even during the sad parts). 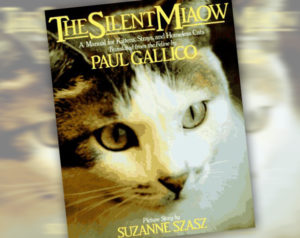 The Silent Miaow by Paul Gallico: This delightful and at times sad memoir is actually a manual for stray cats and homeless kittens on how to convince people that they need a cat in their lives. Written by an older cat who has succeeded in this task, he instructs his feline readers in the art of manipulation, sweet talking, and generally looking cute, and extols the virtues of living with people in a warm, loving home. The Silent Miaow was written in 1964, predating the Internet and its obsession with cats by decades, and includes 200 photos by photographer Susan Szasz.
Read the whole story HERE
~~~~~
Giraffes are…

Google’s autocomplete, which attempts to guess what you’re searching for by looking at the most common searches, can take you to dark, sometimes hilarious places. Looking at autocomplete results also happens to be a great pastime, which is probably why some geniuses decided to create the game Google Feud.
Read the whole story HERE
~~~~~
THIS ‘n THAT 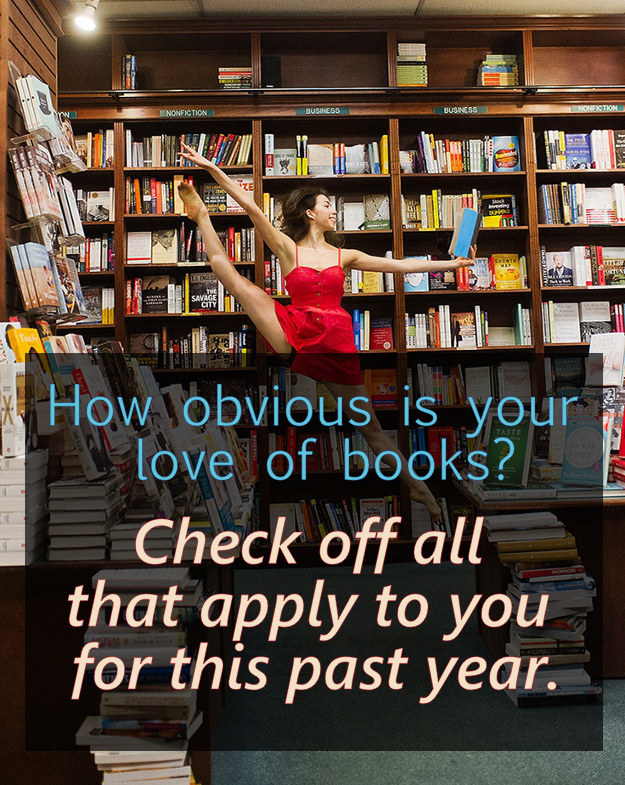 Jordan Matter / Via pinterest.com
I got 66 out of 80. How about you?
Take the quiz HERE
~~~
Stephen King: I’m rich, tax me
In an expletive-filled condemnation of America’s tax system, the bestselling novelist, who donates $4m a year to charity, says wealthy Americans have a ‘moral imperative’ to pay higher taxes”
Read the whole story HERE
~~~
200 years of immigration to the US
“It’s easy now to assume that Mexico has always been among the main sources of immigration to America,” Dara Lind writes at VOX. “but as this wonderful chart by Natalia Bronshtein shows, that’s not even close to true.”

Read the whole story HERE
~~~~~
Quote of the Day
“Do not read as children do to enjoy themselves… read to live.” ~ Gustave Flaubert
~~~~~
Alma Alexander      My books      Email me
If you found this blog post interesting, amusing or helpful, then please use the icons below to share it with other writers, readers or the guy next to you on the subway.