“Some people check out books,” Taylor Glascock writes. “Other people check out dudes. Some people do both.”
“Created at the beginning of February 2015, the Instagram account @hotdudesreading immediately garnered more than 366,000 followers. In an increasingly technology-driven world, @hotdudesreading takes the path less traveled. It’s the fine fellows with paperbacks, not the e-readers, that get ahead.” 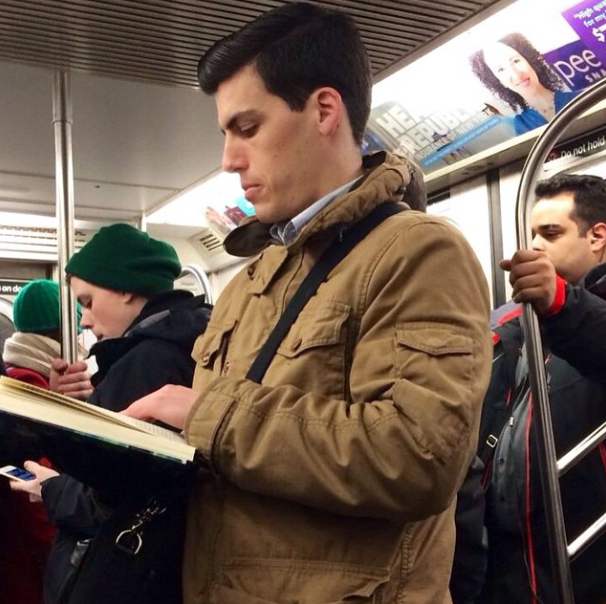 photos courtesy of @hotdudesreading
Sigh. This Clark Kent look-alike seems to have just flown in from Krypton to spend some QT on the F Train with us mere mortals. I may have to pretend to faint so he’ll catch me but I’m going to let him finish the last few pages of 100 Years of Solitude first.”
See more hot dudes HERE

The hotel that took a jaunt around the moon

AbductiCon was my first venture into straight SF .

It’s the Friday before a science fiction convention weekend. Hundreds of fans are lined up at the registration desk. The posters for the Media Guests of Honor aren’t done, there’s a problem with the Program Booklet, the Author Guest of Honor has gone AWOL, and the coffee in the Green Room is dreadful
When ConCon member Dave Lorne realizes the whole hotel is lifting off the ground after a silver sheened man enters something on a strange tablet, he blurts out,
“Put us back!”
The silver man looks at him with a curiously cocked head and says with something like regret,
“I can’t do that, Dave.”
Moments later, programming chair Xander steps out on a balcony, sees the ocean far below, and says quietly to his companions,
“Houston, we have a problem.”
The fan-filled hotel has been kidnapped by time traveling androids and taken for a jaunt around the Moon while they search for their roots. At least something is going right.
Welcome to AbductiCon.
A hilarious and metaphysical novel of SF fandom, the convention culture, and the treasured tropes of science fiction.
Buy it today !

Amazon
Book View Cafe
Amazon Kindle
Also available at most online vendors and some bookstores
~~~~~
Quote of the Day
“I do not want people to be very agreeable, as it saves me the trouble of liking them a great deal.” — Jane Austen, letter
~~~~~

[user_registration_form id=”9452″]
If you found this blog post interesting, amusing or helpful, then please use the icons below to share it with other writers, readers or the guy next to you on the subway.