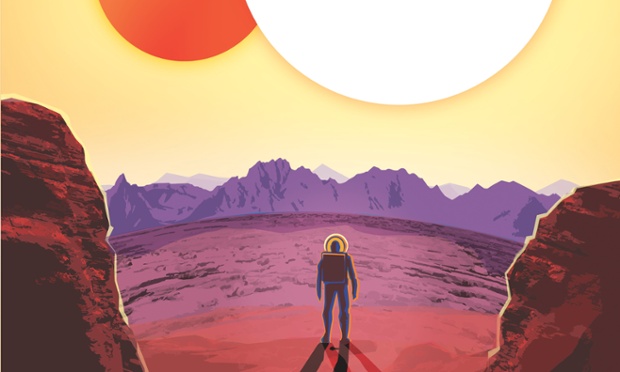 With two suns, Kepler-16b is a real-life version of Luke Skywalker’s home planet Tatooine in the Star Wars films. All photos: Nasa

The US space agency has created a series of striking travel posters inviting tourists to visit recently discovered “exoplanets”, including Kepler-16b, which orbits two stars, Will Coldwell reports in Bustle.
See all the posters HERE
~~~~~
FREE ebook
I will send a free ebook version of Random, Book 1 in my YA series The Were Chronicles, to the next 10 people who pledge to leave a review on Amazon.
To accept the offer, just send an email to me HERE with the subject line “Free Random Offer”
Include:
(1) a valid email address to send the ebook to
(2) a single sentence in the body of the email acknowledging that a review will follow.
I hope you love the book, but reviews, of course, need only be honest.
~~~~~
10 Weirdest Science Fiction Novels That You’ve Never Read
At io9, Charlie Jane Anders takes a look some of most most mind-bending science fiction and fantasy ever published.
She’s right, I haven’t read any of these books. Would I really want to? But if you have, I’d be interested in what you thought of them. 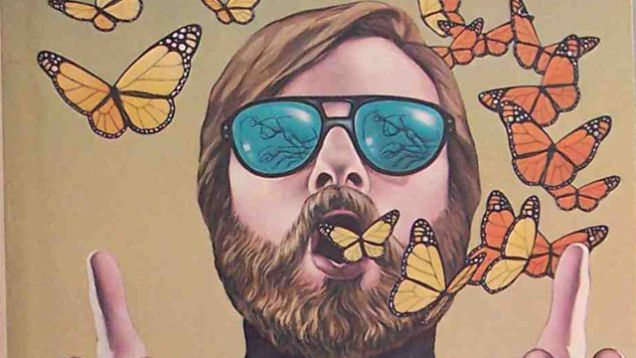 For example
1. The Butterfly Kid by Chester Anderson (1967)
As the book’s blurb says: “The Hippies had a New Kick: From Outer Space!” Here’s how we summarized this book a few years ago: Anderson’s semi-autobiographical novel has a main character named after himself, and a supporting character named after his roommate at the time. Aliens are supplying a new kind of drug, known as “Reality Pills,” which cause your LSD hallucinations to become physically real. One character takes the Reality Pills and is able to make butterflies appear spontaneously, all colors and sizes. Chester faces the vicious Blue Lobster aliens, who hook him up to a machine that forces him to experience horrifying visions that he would have paid to see otherwise. He writes: “I was the rabbit in the moon. I was as corny as Kansas in orbit. I wasn’t thinking very well at all!”
See all the weird books HERE
~~~~~
The lonely roads
What does it feel like when you think you’re the only one in the world, that nobody wants you, likes you, knows you exist?
Probably like one of these roads.
The world is empty. The horizon is in the far distance. Welcome, lonely soul.
Start walking.

Throughout his travels, Andy Lee has taken a lot of pictures of beautiful and forlorn roads around the world, Bored Panda tells us. Now, this creative director, filmmaker, painter, doodler and photographer has collected these photos in an amazing series called “Roads” that will fill you with wanderlust.
All the lonely roads HERE
~~~~~
Does handwriting matter any more?
Psychologists and neuroscientists say it is far too soon to declare handwriting a relic of the past, Maria Konnikovaj reports in thge New York Times. New evidence suggests that the links between handwriting and broader educational development run deep. 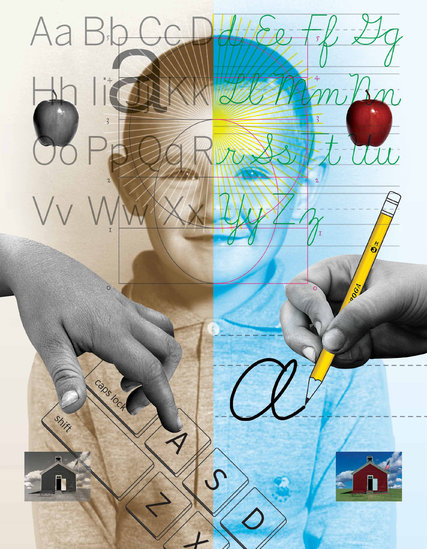 Michael Mabry
Children not only learn to read more quickly when they first learn to write by hand, but they also remain better able to generate ideas and retain information. In other words, it’s not just what we write that matters — but how.
“When we write, a unique neural circuit is automatically activated,” said Stanislas Dehaene, a psychologist at the Collège de France in Paris. “There is a core recognition of the gesture in the written word, a sort of recognition by mental simulation in your brain.
“And it seems that this circuit is contributing in unique ways we didn’t realize,” he continued. “Learning is made easier.”
Read the rest HERE
~~~~~
7 Books Which Debuted 100 Years Ago, Give or Take…
Ah, the passage of time. Every author hopes his works will stand the test thereof. Well, the start of 20th century is over 100 years behind us. And in the year 1915, the world saw several major works debut, so Off the Shelf thought they’d look at some of the biggest hits.
Actually, one of these books was written around 1915 but wasn’t actually published until 1971. Another wasn’t even written until 1923…but maybe the author THOUGHT ABOUT WRITING that book in 1915. Yes. That’s it. It could happen. I mean, it’s Bambi. You love Bambi! Then again, you probably haven’t read it, either. That’s OK! Go get a copy and some coffee, and see the other books still standing after one hundred years.” 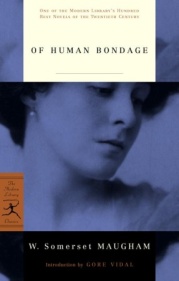 Of Human Bondage
by W. Somerset Maugham
The story of Philip Carey, a sensitive orphan born with a club foot who is eager for life, love and adventure. After a few months studying in Heidelberg, and a brief spell in Paris as a would-be artist, he settles in London to train as a doctor where he meets Mildred, the loud but irresistible waitress with whom he plunges into a tortured and masochistic affair. There is no more powerful story of sexual infatuation, of human longing for connection and freedom.
See the others HERE
~~~~~
THIS ‘n THAT
What If Doctor Seuss Drew All 13 Doctor Who Incarnations?

A better look HERE
~~~
Beer Gets Macabre
Everyone’s favorite anglophile cosmic horror author will finally be immortalized in the one way guaranteed to echo through the ages: A series of beers. H.P. Lovecraft, the celebrated author of numerous short, influential horror stories in the 1920s-1930s, will be the subject of a line of brews from New England brewers Narragansett.
Read the article HERE
~~~~~
Quote of the Day 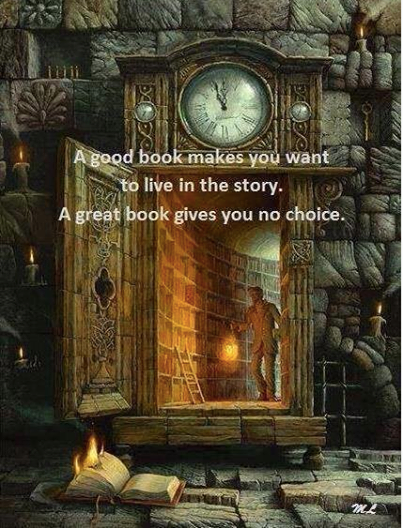