An author’s year of reading “literature” 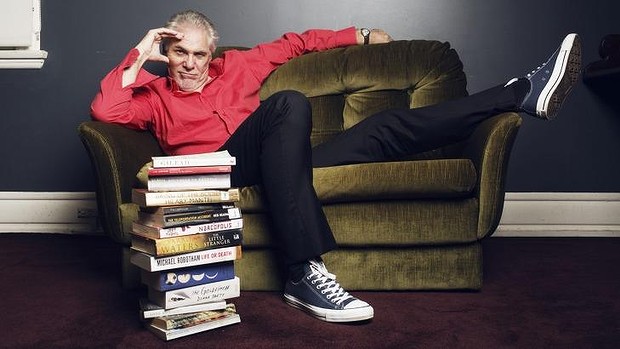 The writer, at the Lord Dudley in Woollahra, with a selection of the books he has pored over. Photo: James Brickwood
It seemed such a simple idea. author Keith Austin writes: “spend 2014 reading nothing but literature. Not mere ‘books’, you understand; literature.’
“It would be improving; I would dive into the ocean of award-winning literary works and emerge at the other side … understanding what it takes to achieve greatness,” he went on.
“Look, it wasn’t all bad…”
~~~~~
Book characters, besides Sherlock, that Benedict Cumberbatch made better in the movies
From Christopher Tietjens to Smaug, has any actor managed to bring to life so many roles from great literature quite so well and winningly as Benedict Cumberbatch? Off the Shelf asks. Publishers around the world – not to mention the BBC and PBS – owe him big time, they conclude.
A case in point:

Parade’s End: Widely considered one of the best novels of the twentieth century, Parade’s End explores the world of the English ruling class as it descends into the chaos of the first World War.
In the BBC/PBS mini-series a blonde Benedict portrays Christopher Tietjens an officer from a wealthy family who is torn between his unfaithful socialite wife, Sylvia, and his suffragette mistress, Valentine. Heartbreaking, terrifying and beautiful.

~~~~~
How people asked strange or embarrassing questions before Google
“In a world pre-Google,” reads a caption on NYPL’s Instagram, “librarians weren’t just Wikipedia, they were people’s Craiglist, Pinterest, Etsy, and Instagram all rolled into one.”
From 1940 to 1980, Julie Gerstein of Buzzfeed tells us, the library kept track of questions with a paper file. Recently, that old box of questions was rediscovered. 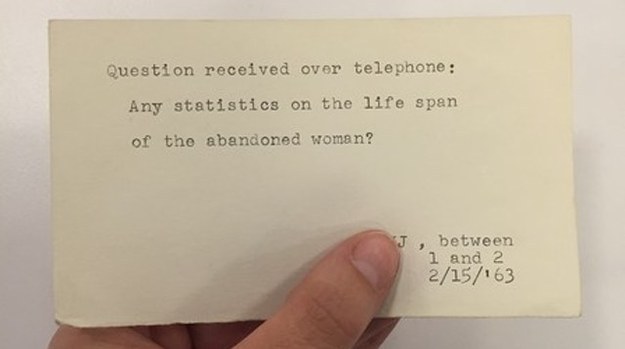 nypl.org
See other questions HERE
~~~~~
The link between Jane Austen and feminism
Flavorwire’s new editor-at-large Sarah Seltzer talks to the Guardian about why Austen has endured, especially online.
Even though Austen wasn’t out there smashing the system, her books are all about filtering a very patriarchal society through a female point view. She made profound observations about the way people interact, specifically on how women make do in a world that is hostile towards them.
Lizzy Bennet [in Pride and Prejudice] is a prime example, who filters her experience through wit and wry observations, and that’s essentially what feminist bloggers do. There’s a really strong connection between Jane Austen and online feminism where we’re using humour, memes and jokes as a way of processing living in patriarchy.
Read the article HERE
~~~~~ 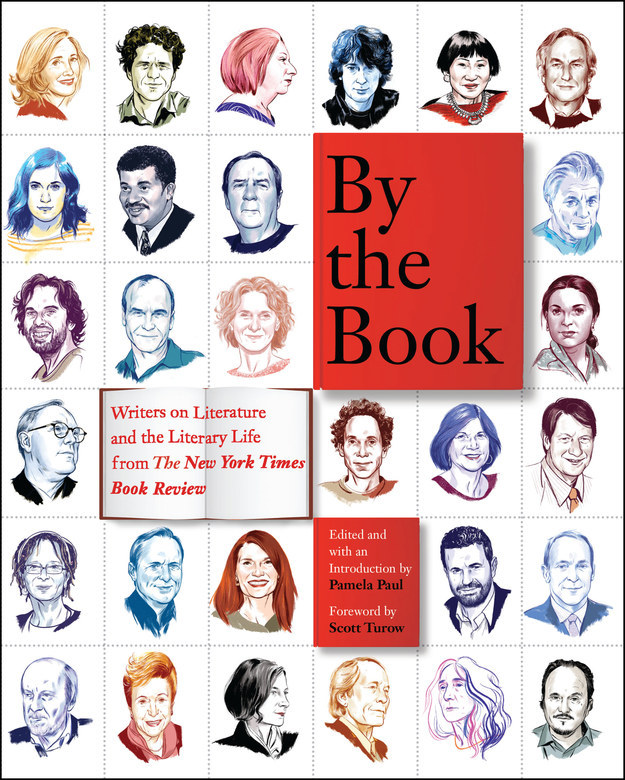 Talking books with the editor of The New York Times Book Review. Pamela Paul conducts one of her famous “By the Book” interviews… on herself.
Q: You’re hosting a literary dinner party. Which three writers are invited?
PP: Dorothy Parker, H. L. Mencken, and Mark Twain. It would be feisty and fierce — something would get spilled and someone might actually get hurt — but I could just lean back and listen, and wonder what each would write about it the next day.
Q: What books did you feel like you were supposed to like but didn’t?
PP: I actually hate a lot of books that other people passionately love. I really disliked The Great Gatsby, and honestly, all of Fitzgerald leaves me cold. (Though I adored Nancy Milford’s Zelda biography.) I gritted my teeth with disgust through The Fountainhead, which contains some of the worst prose I’ve ever read. Dominique was always striding across the room. I dislike the Beats and couldn’t stand On the Road. I wanted to throttle Holden Caulfield — what a complainer! What kind of person would complain like that? Oh, wait.
Read the whole interview HERE
~~~~~
Thirteen year-old Shubham Banerjee has built a braille printer out of a robotic Lego kit to help blind readers print out texts to read.

Read the story HERE
~~~~~
An Ode to Grandparents Who Give Books
Bookseller Stephanie Appell remembers the copy of Garth Nix’s Sabriel that her grandmother gave her for Christmas when she was a kid.
“It was a book ahead of its time, a story of magic and the search for identity, featuring a strong female protagonist whose voice echoes in the stories of today’s heroines like Hermione and Katniss. I devoured it and wanted more. I found my way to Tamora Pierce, Holly Black, Robin McKinley, Susan Cooper, Brian Jacques, Patricia Wrede, Jane Yolen. The books in those boxes shaped the reader — and the person — I became.
“So I’m serious when I tell my customers that ‘I’d really love to help you find the perfect book for the child you’re shopping for. I know it could change their life.’ “
Read the rest HERE
~~~~~
THIS ‘n THAT
Ereaders Are Bad For Sleep: People who read ebooks before bed don’t sleep as well as those who read print. Research shows that using ereaders delays the circadian clock and suppresses the sleep-promoting hormone melatonin.
~~~
An Astronomically Correct Rendition Of ‘Twinkle, Twinkle, Little Star’
~~~
Drunk Driver Busted by Parrot
Guillermo Reyes was driving home from a bar in Mexico City when he encountered a DUI traffic stop. When police talked to him, they heard a voice from inside the car saying, “He’s drunk! He’s drunk!” They shone a light into the car and saw Reyes’ parrot. The cops gave Reyes a Breathalyzer test, and concluded that he was, indeed, driving while impaired. Reyes was sent to the drunk tank overnight, and the parrot was allowed to accompany him.
19 other weird stories HERE
~~~~~
Quote of the Day
“My job is not to write what the reader wants, but what I want. What the story (or poem) wants. I have to tell  the truth  on the slant (as Emily Dickinson said) as I see it, as the story comes to and through me. That’s all I owe anyone, all I owe myself–to tell Truth on the slant.” ~ Jane Yolen
~~~~~
Alma Alexander     My books     Email me
If you found this blog post interesting, amusing or helpful, then please use the icons below to share it with other writers, readers or the guy next to you on the subway.