Is she a Werewolf? or a Wereboy?

I wanted them real. I wanted the reader to start glancing nervously at the person sitting next to them on the bus or the subway and starting to wonder whether that strange fox-faced sharp-featured woman or the pig-nosed broad-featured guy dozing in the corner actually turned into the things you think they might be turning into, when the moon was right.

It’s been a few years, now, my doing doing this. There’s a trail of interviews scattered on the internet, leading like bread crumbs towards the stories I have put out there.
These interviews have ranged from adequate to sharply insightful and relevant. I don’t rank them, and Il do every interview to the best of my ability, striving to walk the tightrope between being entertaining and informative. But often when an interview consists of pre-chewed questions or asks about stuff I’ve answered many times before it begins to be difficult to keep being fun and original. .
So it’s always a joy to be offered questions that are original, one-of-a-kind, and obviously indicative of the simple fact that the interviewer had actually read the book – and had GOT it!
One of the best such interviews I’ve ever done is up now, at Angela’s Library, where we talk about “Random,” the 1st book in The Were Chronicles, as well as the rest of life, the universe, and everything.  It was a delight to do it.
A brief excerpt:
Q: For most people, the word “Were” will trigger images of werewolves howling at the moon and biting innocent victims. In your novel, though, the Were world extends far beyond wolves and full moons. What was your process for developing the Were-kind in Random?
A: This particular world became very complex very quickly. My version of Werewolves – the Lycans – are definitely not the howling-at-the-moon types. They are scientists and they are driven by that pure scientific fury that can sometimes take over a human soul and demolish it if it stands in its way.
My chagrin here is that I love wolves. If I have a totem animal, it is the wolf. And yet somehow these complex, twisted, driven, fiercely intelligent and loyal creatures that spun out from under my pen just would not be ‘good’, and they quickly evolved into one of the villains of the piece. In Random, they are nebulous, their presence one of that black storm cloud that you might see on the horizon and begin to batten down the hatches in anticipation of hail.
In Wolf, the second book, they take much more of a center stage, and they are absolutely fascinating. Their dynamics, the life of the pack, their loyalties and their mindset, proved to be an utterly enthralling thing to delve into, and while second books in trilogies are too often weak bridges from a great opening in Book 1 to a satisfying conclusion in Book 3, this particular Book 2 is bucking the trend beautifully. It is a strong and beautiful story and it is carried by one of my favorite characters. Jazz’s brother Mal – the wolf of the title – well – I think I fell in love with him, a little bit. I think it will be difficult for my readers not to do the same. He is just such a beautifully strong, vulnerable, wounded, wise, intelligent wolf.
As for the rest of the Were – I actually set out to develop a genetic basis for the “being Were” thing, and that gets worked on in Wolf.
I wanted to breathe  life into the tired old trope you mention, that of the word “Were” calling up the howling murderous mindless beast in the reader’s mind. I wanted Weres to be real. I want the reader to start glancing nervously at the person sitting next to them on the bus or the subway and start to wonder whether that strange fox-faced sharp-featured woman or the pig-nosed broad-featured guy dozing in the corner actually turns into the things you think they might be turning into, when the moon is right.
You will never really know for sure, again, after reading these books, whether someone right there beside you might be something wild and strange during the nights of the full moon… or whether YOU might be.
Read the whole interview and its provocative questions and enter the giveaway of a signed copy of Random. Be the first on your block…
Read the interview
~~~~~
Quote of the day 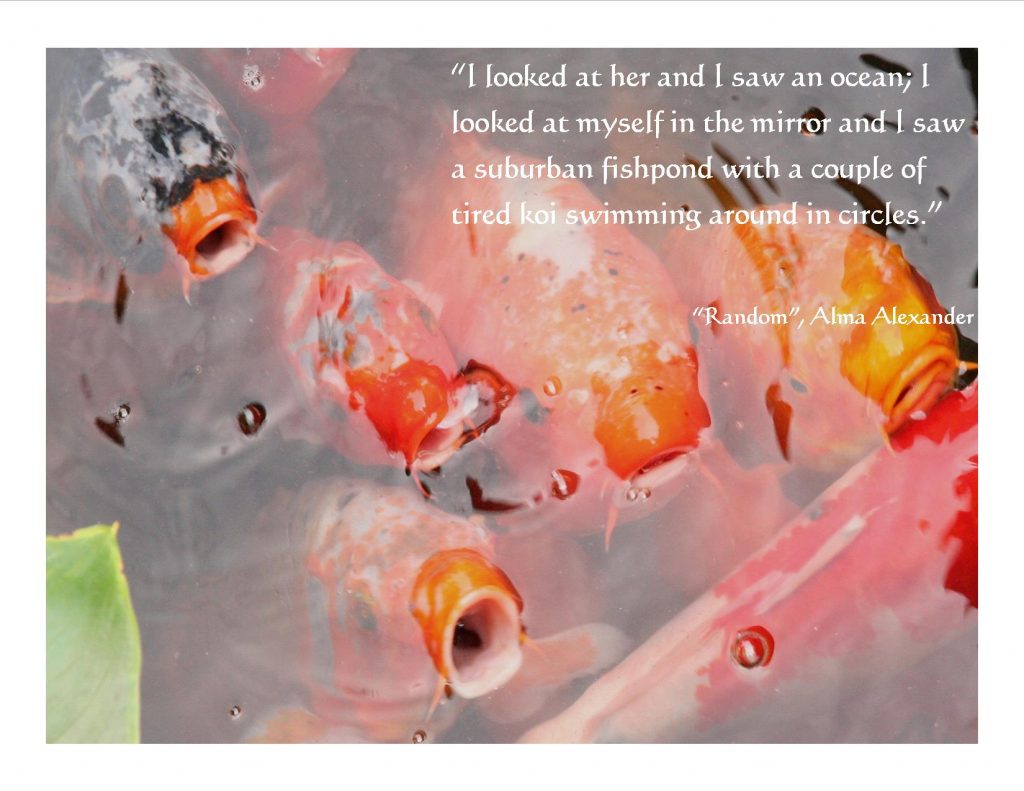