So that was Orycon

The Portland, Oregon SF/Fantasy con, Orycon 35, this past weekend was the first that I’ve been to for a while and it served to remind me just why cons are so much of a needful thing.
The panels were refreshingly different this year – i.e. I didn’t get stuck on yet another “Strong Female Characters” panel which was beginning to happen with depressing regularity. I was told by someone that I give “good panel”, and that I’m rather proud of. On Orycon’s panels, it was easy. They were new and interesting and they sold themselves.
But the rest of it, over and above the panels, is what truly makes a convention. You meet friends you haven’t seen for six months or a year since you were all at the same con. People you retire to the bar with for a leisurely drink and reminisce of cons past; or large rowdy giggling groups who gather together for shared meals and much laughter; or someone whose triumphs or tragedies you’ve shared online for months and finally have a chance to offer a hug of congratulations or support. That.
I had that in abundance, this Orycon.
Over and above my usual trusted Portland crew who make sure I am taken care of – ramblin_phyl and joycemocha-it was meeting up with people I had reconnected with after years of hiatus, or friends who might in theory live only a couple of hours away from me – in Seattle – but whom I see rather less often than I would like. And they are good friends. Old friends. Good old friends. And sometimes people whom you might not have known all that well before but with whom you suddenly connect and something new and wonderful happens.
To all of you whom I talked to and cried all over and laughed with this weekend, to all of you who made this con such a joy and such a re-grounding for me, thank you. I needed you, and you were there.
This is not a con report. I don’t think I want to or need to write a full con report on this con. Let me just say it was a place I needed to be, and there were people I needed to be with, and it all came at just the right time for me. Onwards and upwards, re-inspired. Thanks, Orycon (and all who briefly came together within it).
After the con I joined Han Solo, storm troopers, a Tusken Raider and 29 fellow authors at Powell’s Books for Sci-Fi Authorfest 7. 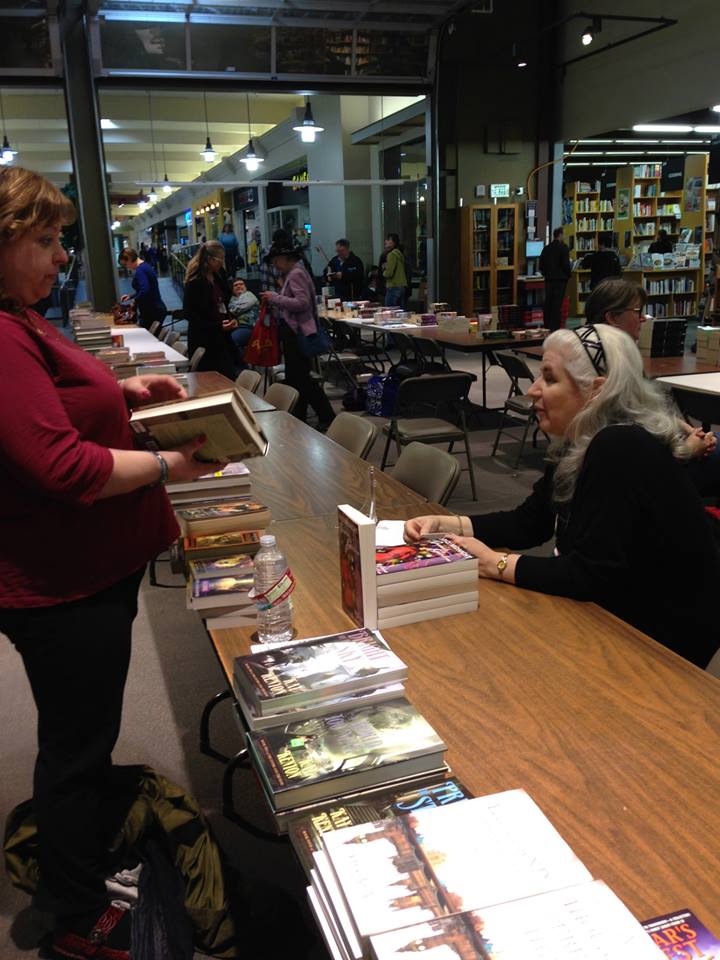 Alma selling an increasingly rare First Edition of the Hard cover edition of The Secrets of Jin-shei. (Photo by Bronwyn Lake) 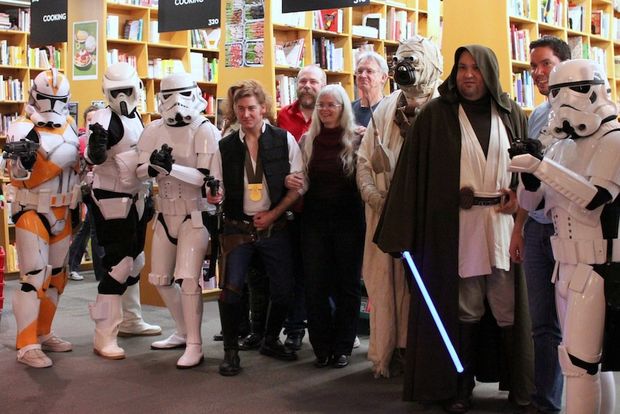 (Anna Marum/Beaverton Leader)
The storm troopers et al were from the Cloud City Garrison of the 501st Imperial Legion, a Star Wars costuming club, Anna Marum reported in The Orgonian.
Authorfest 7
—–
The Star Trek tricorder — for your smartphone
Scanadu has raised $10.5 million in funding to build the tricorder…er, Scout…to read vital signs like heart rate and temperature, etc. and send the data to your smarphone for your doctor to check.
On screen
—–
Travel posters advertise literature’s most fantastical vacation spots
Autun Purser’s brightly colored travel posters invite us to the usual science fiction and fantasy destinations like Arrakis and Barsoom, but he also reaches farther into the fantastical canon, dreaming of otherworldly vacations great and terrible, Lauren Davis tells at io9. 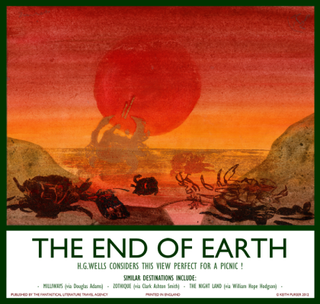