The books that shaped a writer

John Scalzi uses a personal milestone, the 12th anniversary of his first pro publication in Science Fiction, to write about the works of Science Fiction and Fantasy that shaped his life and career.
I’m impressed that he knows the exact anniversary of his very first pro publication. I’ve been writing since Methuselah was a boy and I don’t even know what my first pro published story was never mind when it was. Writing has always been a part of my life.
But there were, of course, formative works in the genre in which I write. So here are mine,  a random number in random order. These are the things that mattered to me when I was growing up and learning to live and love and write.
1. Lord of the Rings, J.R.R.Tolkien 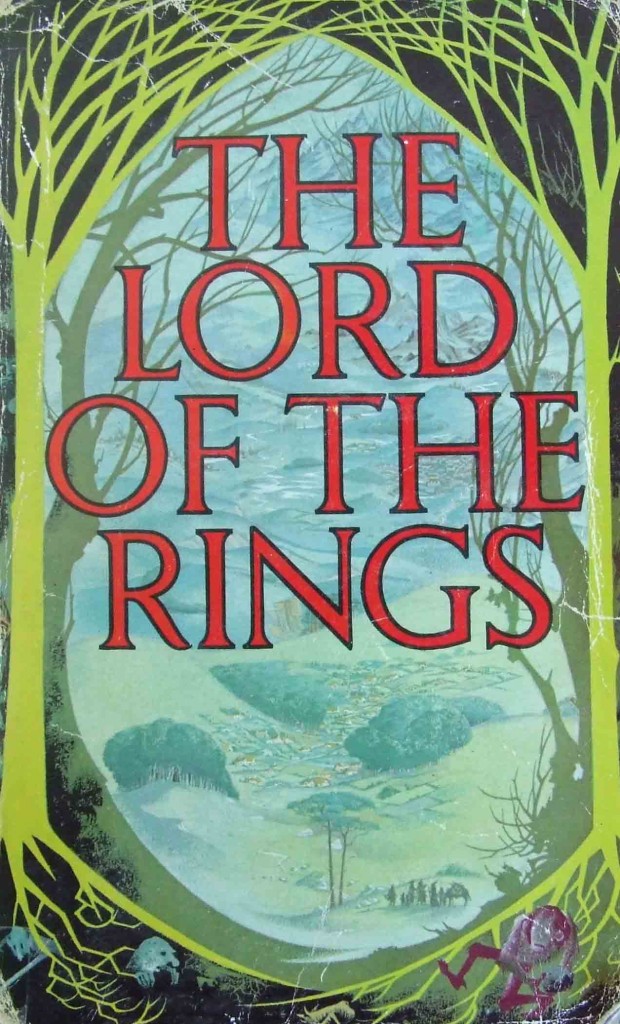 This is the cover of the paperback edition I own of the full trilogy in one wrist-breaking volume. This is a book which has been LOVED, my friends. I have read and re-read it until I know it by heart. I can get lost in it. And every time I think I can go back and figure out what it is about this world and the way that Tolkien rendered it that makes it so deeply magical for me I fail at that task miserably because by the second chapter I’m into it again, the story closes over my head, and analysis becomes irrelevant.
In today’s world of fast food and fast fixes, many readers say that they ‘can’t get into’ LOTR because it is too dense or too complex or too slow or too *somethihg*. There can be no greater recommendation than someone calling a book “complex”. I can have shallow any day – I am frequently SWIMMING in it – newspaper headlines reeking of selfishness and greed, bestsellers such as “Fifty Shades of Grey” – I need my dose of complex to survive it all. And LOTR delivers on that. It has always delivered.
This is the thing that taught me that an imaginary world can be more real than reality could ever be. This is the kind of thing that made me WANT to create worlds of my own. Tolkien once spoke of “desiring dragons with a deep desire” – well, his story made me desire to write one of my own, with just as much depth and substance, with a desire fully equal to his own for his dragons. This book taught me to dream with my eyes open.
We will NOT talk about the movies.
2. The Amber Chronicles, Roger Zelazny 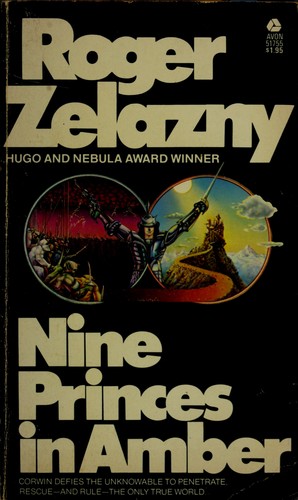 It’s way too long ago now for me to remember details, but at some point I received a box of books which contained, amongst other things, the five books that now form the First Amber Chronicles. The illustration, above, is of the first book in that series. I was a teenager, young, inexperienced, still searching for direction, when I cracked open “Nine Princes in Amber”… and fell in love.
I was astonished by so many things in these books. The fact that they fyve books interlocked and made a seamless whole – which ended, in the final volume, at the very place where the first volume began. It was possible to simply put the fifth book down and start reading again from the beginning (which I did…) and realise immediately that one was now reading a different story, because of all the background knowledge that had been gained from that first innocent “cold” read. The complexity of the story – are we starting to see a pattern here? – blew me away, the realism of characters born of pure undiluted fantasy fascinated me; the whole idea of the Family Tarot Pack and all that it represented made me positively giddy.
Amber satisfied so many different longings that it is almost impossible to be coherent about any of it.
From that moment on Zelazny was a must-read author and I gathered up his books zealously until I owned an entire shelf of them. He wasn’t ALWAYS transcendent, but when he was good he was brilliant and a complete nonpareil and he quickly became one of my personal literary gods.
I was fortunate enough to meet him, only a few months before he died. I brought THAT book, the first Amber book, in that oriignal well-loved paperback edition, for him to sign. He took it into his hands and turned it this way and that, looking genuinely mystified for a moment and then asked me just how long I’d HAD that particular volume because that edition had been out of print for years. (He told me other things, too. Things I greatly treasure. But that’s another story…)
Amber. How I love Amber. Its weird architecture, its dysfunctional family, the possibility that hero might turn into villain and vice versa, that you never really knew what you could expect next, the sense of storied history and legend that underlay it all, the beauty and the occasional ugly betrayal, the glory and the sorrows. All of it. How did this change and inform my own writing? It made me realize there is ALWAYS something going on behind the curtain, and that it is an author’s gift to his or her readers not to reveal EVERYTHING. A little mystery matters.
3. Tigana, Guy Gavriel Kay 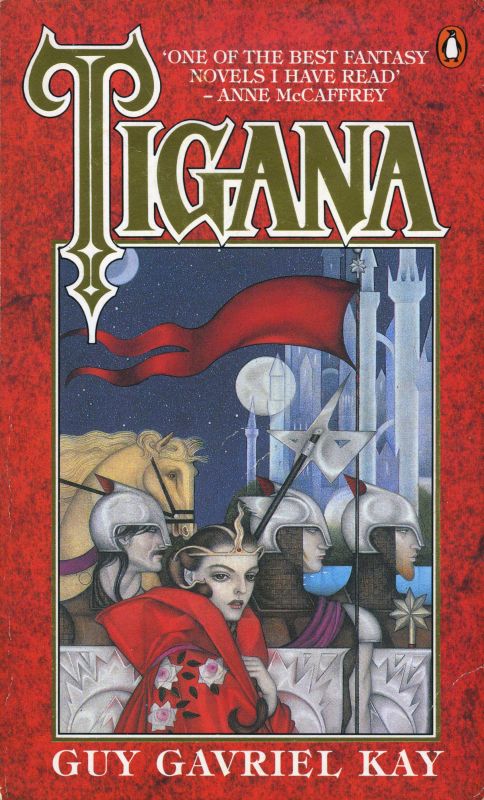 I don’t actually remember if this was the first book by Guy Gavriel Kay that I ever read, although it might have been. I know that I’ve had a couple of favorites since “Tigana” – “A Song for Arbonne”, for instance, or “Lions of Al-rassan” – and I know that I consider him a master of the historical fantasy genre.
But “Tigana” was one the best books I have ever read. Not genre, I go beyond that Anne McCaffrey blurb on the cover. Yes, it was a great fantasy – but its power, for me, lay in its stark and raw TRUTH.
I don’t know how a white middle-aged Canadian male knows what it means to lose your country, your soul, the core of your being… but he does. Oh, he does.
“Tigana” ripped my heart out because it viscerally conveyed something that I could not believe that anyone could understand about me — the fact that I am adrift because my anchor has been destroyed.
The country I was born in no longer exists; it has been dismemembered into several sqaubbling warring statelets, some of whom would sooner cut my head off than admit that I was once a part of the same nation as they were. And just like the fabled Tigana of this story, there will come a time when living memory will fail and nobody will remember any more the land in which I was born, in which I grew up and learned to see the world, to love people and places, to dream big dreams. I find myself remembering a place which simply no longer exists, which is as much of a fantasy as any novel, and it’s *my own past*. And this is the thing that “Tigana” touched so deeply, in so raw a fashion – it made me scream and weep and sob and pray.
Some day I can only hope that I can write something with the power of this book.
4. Dune, Frank Herbert

I wrote about “Dune” already, here – I invite you to go read that in its entirety. But – hey – pattern – why did I fall in love with this book? Can you say “complexity”? “Depth”? A sense of three-dimensional truth that informed the very fabric of it – sure, perhaps none of this was true, none of this could ever be, but dear GOD it felt like it was.
How did it inform my own writing…? Well, aside from the obvious (this was a masterclass in worldbuilding…) here’s what I said in that article I linked to, above:
“The themes of this work are enormous and wide-ranging — from Machiavellian politics to ecological change and its consequence, to mystical religious transformation. Many of these ideas took me years to fully take in — fourteen or fifteen is far too young for some of the ramifications, unless you’re one of Paul Muad’dib’s children — but they have percolated through my own visions, since. When I wrote the desert sequences of The Hidden Queen and Changer of Days, for instance, they may have owed much to what I knew of places such as Morocco, which are firmly in our own “real” world — but the roots of my own world, without the spice or the great worms or the sheer breadth of Herbert’s vision, are sunk deep into the mystic sands of Arrakis.”
Greatness matters. You know it when you see it. And I saw it, the first time I reached for a book called “Dune”.
5. Songmaster, Orscon Scott Card 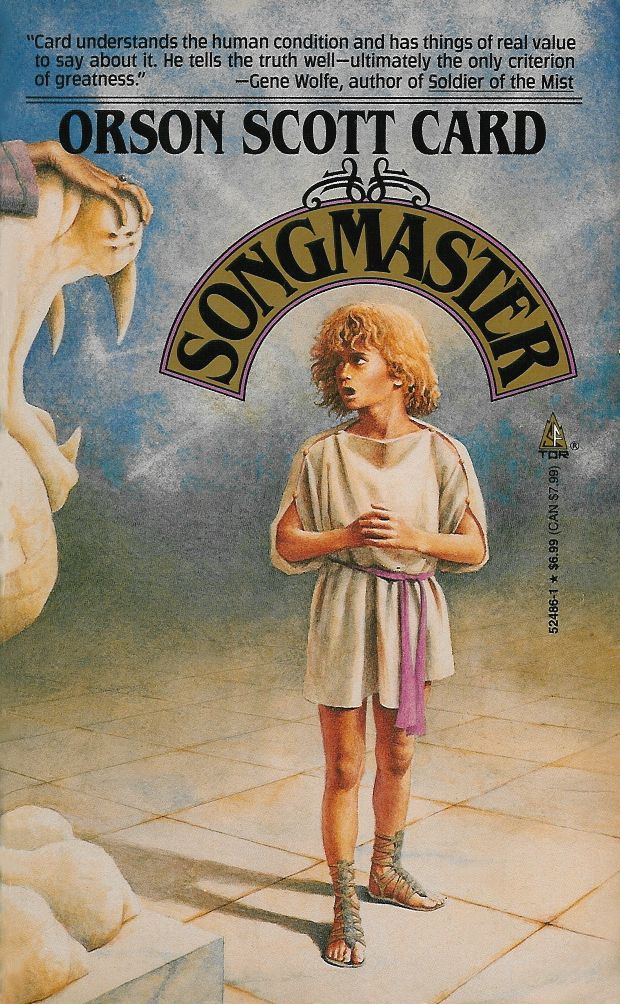 Yes, I know. And it’s been a really long time since I’ve actually picked up anything by him at all; the last thing that I did was so preachy and stultifying that I couldn’t get into it at all. And even this particular book has its problems – but let me explain.
I read the first part of this book as a stand-alone story somewhere in the Magazine of Fantasy and Science Fiction or the like, I don’t recall now, and I was shaken by its insight and its power and its beauty.
When the book came out, I bought it immediately – and yes, that first part, the part I had read before and loved, that part was still wonderful. The second part… had its moments, had its ideas and they were perfectly adequately explored…. but… it left me colder. The second half of the book had a whiff of Message to it, something the author wanted to Convey and to have the reader Understand. It jarred. It marred the beauty and the power of that first part, the part I had loved, the part that had moved me.
What did it teach me? That the author’s personal soapboxes really should go into storage when a work of fiction is attempted. Things work just fine if the author is exploring an idea and inviting the reader along on the journey. Things work less well when the author is convinced that he has already been to the place where this idea lives and has the maps and the blueprints to prove it. The author has grasped The Only True Truth and is going to TELL you about it, dammit, and you’d better accept it if you know what’s good for you.
It taught me not to think that I am in any way superior to my readers, or know more, or know better. I let THEM read into the story the things that I think I have put in there. I don’t bludgeon them with those things.
6 and beyond – “Elric of Melnibone” by Michael Moorcock; almost anything at all by Octavia Butler, Ursula Le Guin, Judith Tarr, Ray Bradbury, China Mieville, Tamora Pierce…
SO many books. SO little time. And I am still reading and learning, every day.
What books have shaped you?
— Alma Alexander
Sign up for my newsletter, Tea with the Duchess, here
Email me:
—–