So – I can’t really get out there and support nearly as many of these crowdfunders as I might like to – and there are plenty, certainly, that deserve that support – but THIS one just got a roar of “ABOUT TIME!!!” from me, and I sent them $10.
Not enough for any of the “perks” – but dammit, I don’t need a glossy picture of Nikola Tesla, or a poster signed by his last surviving relative – I might have liked an invite to the Tesla event, but I don’t have the thousands that this particular perk costs, and as for the New Yorker Hotel, been there, done that, kind of thing. Here’s proof:

Room 3327 is Tesla’s room, the one he lived and died in at the New Yorker. I spent a night there – it is not remotely “his” room, the thing has been remodelled twenty times since then and probably the original room 3327 was composed of the room I was in and the room next to it. But it was where Tesla – the living, breathing, man – once stood and slept and breathed. I looked out of the windows that he looked out of, at the city that he saw (different, to be sure, from the one in his day, but it’s still New York…) I walked in his steps. I watched pigeons flying outside the windowpanes, into the sunset.
He was known as the New Wizard of the West in his own lifetime. He was a genius, a man of honour, and probably just a little bit nuts (those pigeons. they meant something.) But I admire him passionately, I think the world is profoundly ungrateful to have covered up his memory with so many layers of oblivion, and I applaud this attempt to turn what might have been one of his most fundamental and lasting achievements if the world hadn’t screwed him over, Wardenclyffe, into a Tesla museum. If they can raise a certain level of funding, the State of New York has apparently promised to match it and this museum might happen, might really happen – and dammit, if ever it was deserved, this is. So if you have a few bucks to spare and you like the century that you are living in and you want to honour the man who built that century – go throw some pennies in their bucket.
If you want to do it another way, you can always buy one of my Worldweavers books – “Gift of the Unmage”, and particularly “Spellspam,” “Cybermage“, and the upcoming all-new Thea Winthrop adventure “Dawn of Magic” – books where Tesla is a major contributory character – and tell me you’ve done so, and I’ll kick in an extra few bucks myself from the proceeds of that…
And just in case you didn’t REALLY know that I was a Tesla Girl – ( here’s more evidence 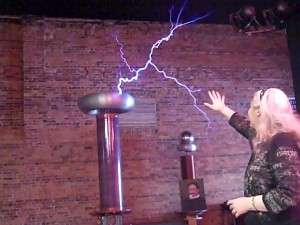 )
So – forget Harry Potter and all that crowd are you on Team REAL Wizard?… GO NIKOLA TESLA!